Kurdish in relation to other languages

I forgot to add Persian. It looks like that Avestan is the closest to Farsi. 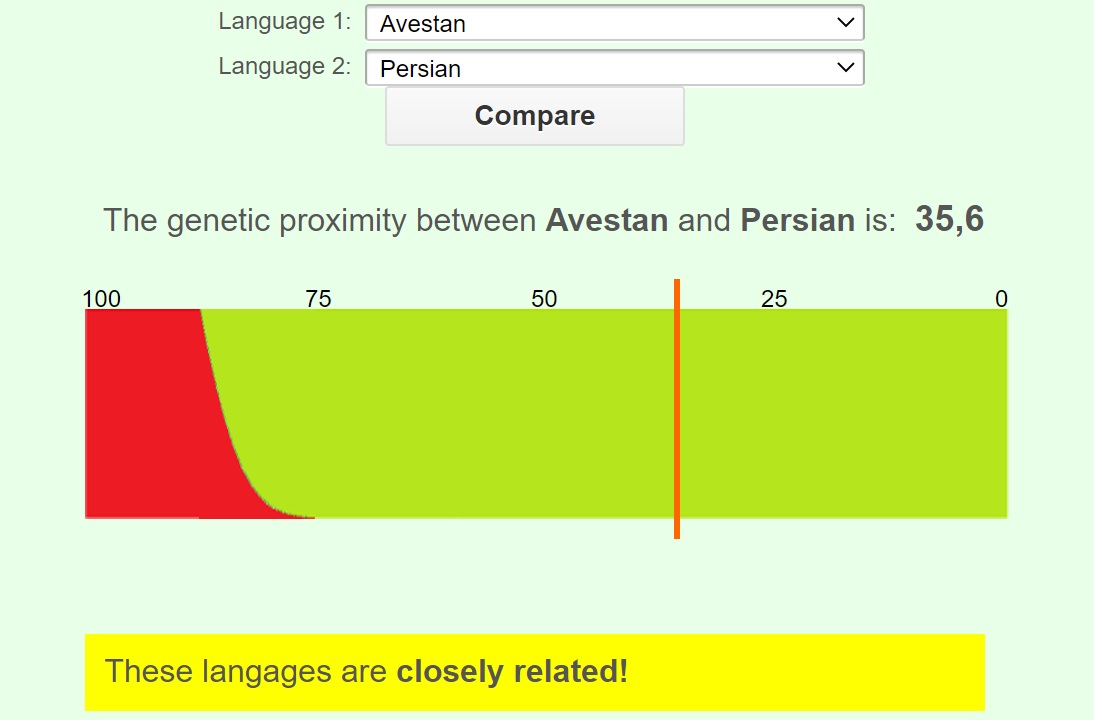 Kurdish, like ALL ancient Aryan (Iranic and proto-Iranic) languages, has an ergative construction. It is still a remnant from our archaic ancestors. Modern Persian lost its ergativity few centuries ago.

Like proto-Iranic, it is most likely that even proto-Indo-European had ergativity. But when 1 branch migrated intro the Steppes/Yamnaya Horizon it lost ergativity. There is no ergativity in the Steppes at all. And ergative construction is very native to Northern West Asian.

The European branch of the Indo-European languages has no ergativity at all.

Ergative constorcution in Kurdish is one of the evidences that Kurdish aka Aryan language is very native to Kurdistan.

The ergative construction in Kurdish

It is well known that during the course of their histories a number of Indo-European languages, all of them members of the Indo-Iranian branch of the family, developed an ergative construction. Thus, in certain tenses of the verb, their grammars came to treat in forlly identical manner the...

(proto-)Kurdish (language of the Aryan Medes) as a Northern West Iranic (aka Aryan) language was influenced by the Eastern Iranic.

There are 2 possibilities how the language of the Medes was influenced by the Eastern Iranic.

a) The Medes came into the contact with the Eatern Iranics (Scythians) in the Eastern Plateau and found a new Iranic tribe that was later known as Parthians. We have many evidences that the Parthians were and stayed in Kurdistan. It is possible that the Parthians from the east brought some branches of R1a into Kurdistan. While the Aryan Medes themselves were most likely R1b and J2a, because R1b is more prominent in the Ezdi Kurds and the Ezdi Kurds are the 'purest' Medes of all Kurds.

b) or Scythians were directly involved and brought their language directly into Kurdistan and changed the language of the Medes a little bit. We have evidence that some Scyhians settled in Kurdistan.

Many Zoroastrian books were written in Zend Avestan (Eastern Iranic), so it is possible that Avestan influenced Northern West Iranic (Aryan) Kurdish language through the Median Magi.

Ezdi dialect of Kurmanji is the least affected by Zend Avestan because the religion of Ezdis, the Yezidism, is more related to Mythraism and actually predates Zoroastrianism. The Yezidism/Mythraism is actually much OLDER than the Zoroastrianism. According to the Ezdi priests Zoroaster, whose ancestors were either Ezdi or Mythra, was from Kurdistan who migrated into Bactria and found his religion.
G

According to this tree Kurdish is more related to Pashto than Persian. Never seen such a tree and I do not agree with it..

Update with a new map.

Staff member
but zaza is not a kurdish dialect . it is an own language
G

Alaska said:
but zaza is not a kurdish dialect . it is an own language
Click to expand...

I don't know. All I know is that it sounds very strange to my ears.

I think that Zazaki is not really Kurdish, but KurdiC. And also part of the Northern West Iranic language family.

But what we know for sure is that the closest languages/dialects to Zazaki are Kurmnaji and Sorani. It belongs to a KurdiC language family.

Zazaki as an Northern West Iranic is much closer to Kurmanji than to Persian or to other Western Iranic languages.


So, we can say that the Zazaki, Kurmanji and Sorani share the same proto-Kurdic ancestor. And that later on Zazaki evolved separtly from Kurmanji/Sorani.

but it is its own language

and i think you are right
G

We can use http://elinguistics.net/ for a comparisson

Conclusion: Zazaki is much clsoer to Kurdish than to Persian. So it can not be directly related to Persian. 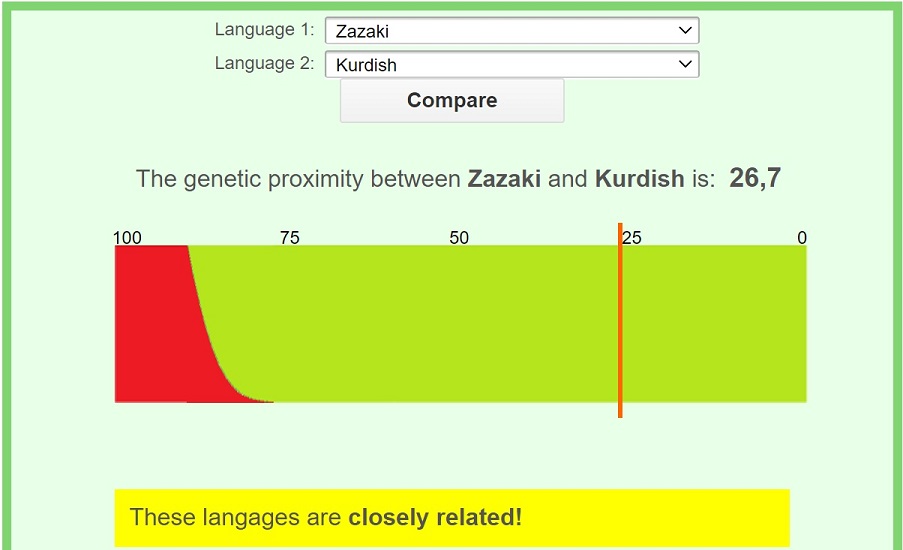 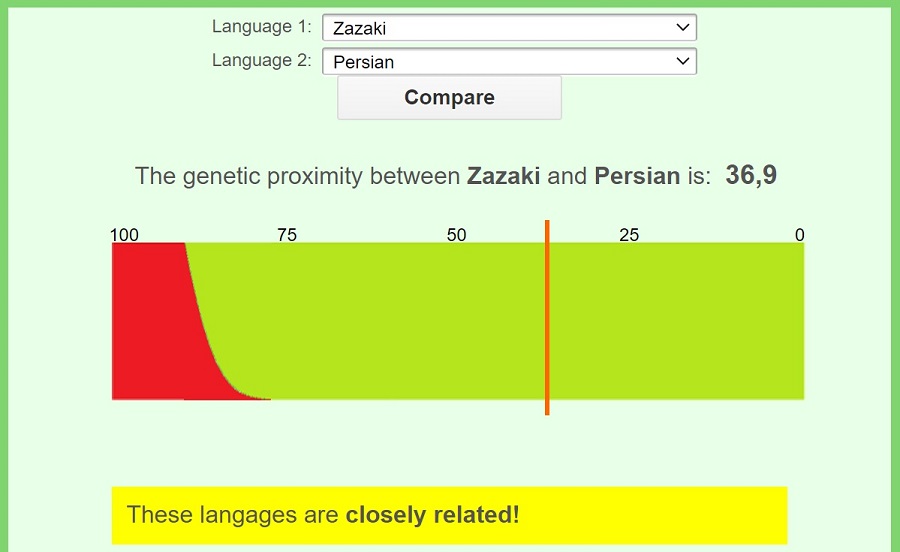 but it is its own language

and i think you are right
Click to expand...

Well, I am not a linguist and I do not have a lot knowledge of Kurdish dialects, but personally, Zazaki reminds me a little bit of Ossetic/Alanic. In Georgia we have some Ossetian friends and Zazaki sounds a little bit like Ossetic. I think that Zazaki, like other KurdiC dialict Gorani, is more influenced by the Eastern Iranian Scytho-Sarmatian language, or maybe Parthian.

Guti said:
Personally, Zazaki reminds me a little bit of Ossetic/Alanic. In Gerogia we have some Ossetian friends and Zazaki sounds a little bit like Ossetic. I think that Zazaki, like other KurdiC dialict Gorani ,is more influenced by the Eastern Iranian Scytho-Sarmatian language, or maybe Parthian.
Click to expand...

there are people in forum always saying that ossetians are not iranic
Click to expand...

Do not forget that compared to the Kurds Ossetians have a very small population. There are 50 million Kurds, while there are only 600 thousand Ossetians in the world. There are even more Ezdi Kurds than Ossetians, lol.

Also Ossetian mtDNA is very, very similar to the Kurdish and Persian mtDNA. Only difference is that Ossetians have much more Y-DNA G2a.

But it is possible that some ancient Iranic tribes were mostly G2a. And from these tribes became Ossetians.

In Tbilisi live many Ossetian people. South Ossetia is part of Georgia, while North Ossetia is part of Russia. In Tbilisi, I have seen many Ossetians in my life. I went to school with them, etc. I have been in Tskhinvali (capital of Ossetian) millions of time. All Ossetians I met consider themselves Iranic and feel close connection to the Kurds.
G

Y-DNA distribution of the Ezdi Kurds and other Kurds from Southern Kurdistan (Northern Iraq). Ezdi Kurds (who are considered to be the closest to the proto-Kurmanji Kurds) have much more R1b than R1a in them. Look how much G2a we have, also more than R1a. It is the same G2a as in the Ossetians..

but then again .....i dont think it makes them less iranic than anybody else since we are a lot closer to them genetically and geographically and also lookwise than to eastern iranics
G

Alaska said:
but the thing is that ossetians score no iran neolithic

but then again .....i dont think it makes them less iranic than anybody else since we are a lot closer to them genetically and geographically and also lookwise than to eastern iranics
Click to expand...

That makes sense. Because proto-Eastern Iranic people (Alanians, Scythians) evolved from the BMAC and later they migrated into the Steppes. BMAC was not Iran_Neo, but it was Iran_ChL. And Iran_ChL is more CHG than Iran_Neo.
Kurds are also more CHG/Iran_ChL, than Iran_Neo. If Kurds were Iran_Neo, we would cluster to people in Baluchistan and Sistan. But we do not cluster with Iranians from Sistan and Baluchistan. We cluster with Caucasus/Iran


Ossetians are genetically close to Georgians. But so what? Georgians and Kurds are also very close to each other genetically.
Last edited: Jun 23, 2021
G

An old Kurdish alphabet is documented by the well known Muslim author Ibn Wahshiyya in his book (Shawq al-Mustaham) written in 856 A.D. Ibn Wahshiyya writes: "I saw thirty books in Baghdad in this alphabet, out of which I translated two scientific books from Kurdish into Arabic; one of the books on the culture of the vine and the palm tree, and the other on water and the means of finding it out in unknown ground." 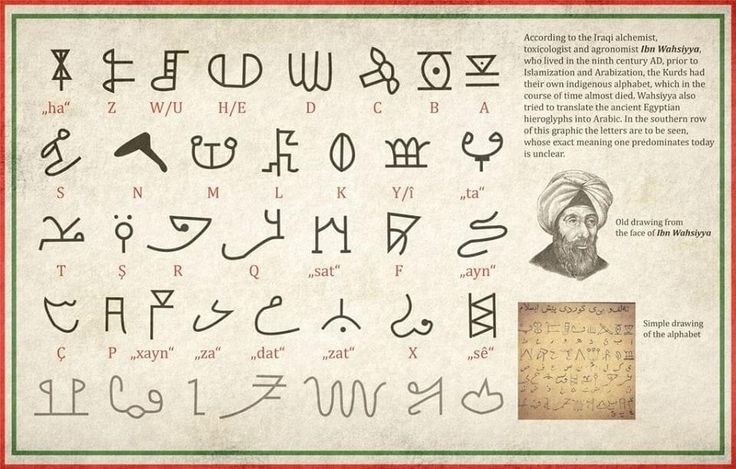 Interesting to see how they put Gorani, Zazaki and Tatic in the so called 'Adhari' cluster here